24 January, 15:036200
National Sport
Wine Run will be held with the support of the Tree of Life brand

Give Your Legs a Break With These Low-Impact Cardio Workouts 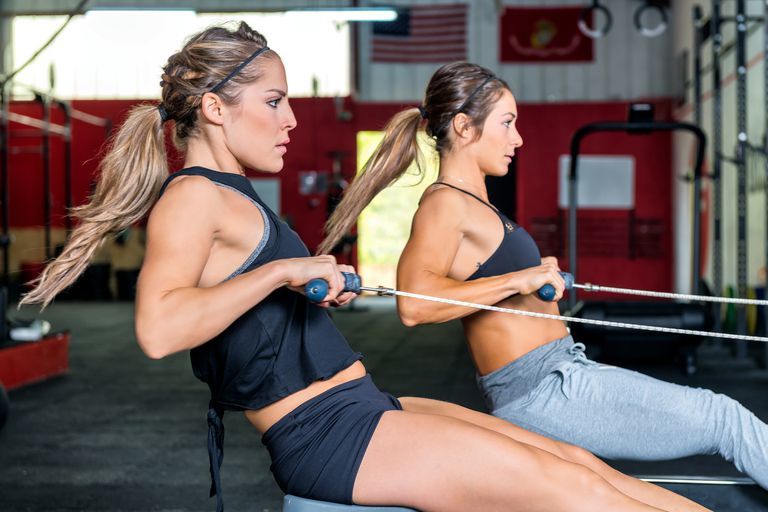 Whether you’re healthy or hurt, incorporating non-running activities into your routine can boost your fitness and help prevent injuries.

There’s no way around it: Running takes a serious toll on our bodies. With every stride we take, our landing leg absorbs a force of about two and a half times our body weight, according to Jay Dicharry, an Oregon-based physical therapist and author of Running Rewired.

“High-impact activities such as running and plyometrics cause a lot of biomechanical stress on the legs,” Dicharry says. That “biomechanical” stress refers to the amount of pounding that our bones, muscles, tendons, and ligaments endure during an activity, he explains. In order to stay healthy, it’s important to incorporate some low-impact cardio exercise to your routine.

What Is Low-Impact Cardio Exercise?

The primary difference between high-impact and low-impact exercise is that the latter causes very little biomechanical stress on our bodies, since it doesn’t involve jumping and landing, Dicharry explains. But the two types of exercises are similar in that they both cause physiological stress, the amount of strain on our cardiorespiratory system (or our hearts and lungs) during exercise. This means low-impact exercises can still improve your cardio fitness just as well as high-impact.

“Your heart and lungs don’t know whether you’re running or biking,” Dicharry says. “Low-impact exercise is a great way to improve your engine without the beating on your legs.”

Because one of his college athletes has suffered stress fractures in the past, Ward instructs her to only run three to four workouts per week, and train on the Alter-G (anti-gravity) treadmill, elliptical, bike, or in the pool on the other days to protect her legs. Though her weekly mileage hardly ever exceeds 30 miles, she still finishes alongside her top teammates in cross country races, thanks in part to the cardio fitness she has sustained and gained through the cross-training.

Whether you’re sidelined with an injury or simply want a low-risk way to add more volume to your training, low-impact cardio exercises are golden. We spoke to experts about the best ones for runners and how you can benefit from each. Here’s the scoop. 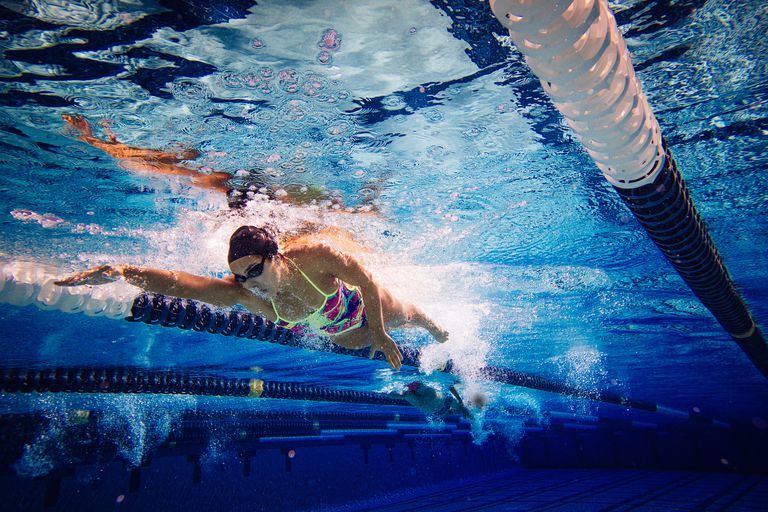 Of all the activities on this list, swimming causes the least impact on the body, Dicharry says. For runners coping with injuries such as stress fractures, knee issues, or arthritis, working out in the pool—whether you’re swimming laps or aqua jogging—is often a safer option for cross-training than using the bike or elliptical, which put more strain on the lower body.

“When one of our athletes is recovering from an injury, she usually starts back in the pool, then progresses to the bike or elliptical as she heals,” Ward says.

While being nearly weightless in the water allows runners’ bones and ligaments to rest, upper and lower body muscles—including your arms, obliques, hip flexors, and core—are engaged when we swim, and our hearts and lungs have to work hard to pump blood to all of those areas, which is why it’s a great cardio exercise, Dicharry explains.

“Swimming forces you to work on breath control, which is important for runners,” he says. To improve your lung capacity, you can try breathing drills, like alternating laps of breathing every three, five, and seven strokes.

To make the most out of swimming, Dicharry suggests doing high-intensity intervals like fast 100- or 200-meter repeats with little rest in between each repeat. The up-tempo sets will rev up your heart rate in the same way track intervals would, but without the impact, he says. 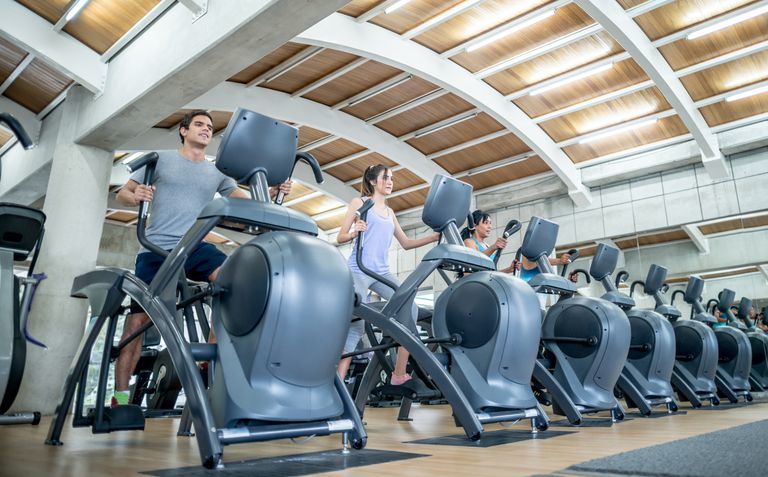 Runners tend to gravitate to the elliptical because it mimics the motion of running the most, but Dicharry points out that because your feet don’t leave the machine’s pedals, it doesn’t cause the same biomechanical stress that running does, meaning you aren’t gaining the elastic strength you need for running. Still, he notes that the exercise does build some muscle memory in the quads, hamstrings, calves, and arms that can translate out on the road.

Like swimming, training on an elliptical also challenges the heart and lungs—and you can get an even greater cardio boost by doing sprints on the machine, Dicharry says. The physical therapist notes that runners usually make the mistake of cranking the resistance up on the elliptical in order to get a better workout, but they’re better off aiming for a higher cadence at a lower gear.

“When you crank the resistance up, you’re basically climbing up a flight of stairs,” he says. “Going faster at an easier resistance will raise your heart rate more, and the movement also resembles running more closely.”

One more thing to remember: Don’t use the arm handles. “This forces you to stabilize on your own,” Dicharry says. 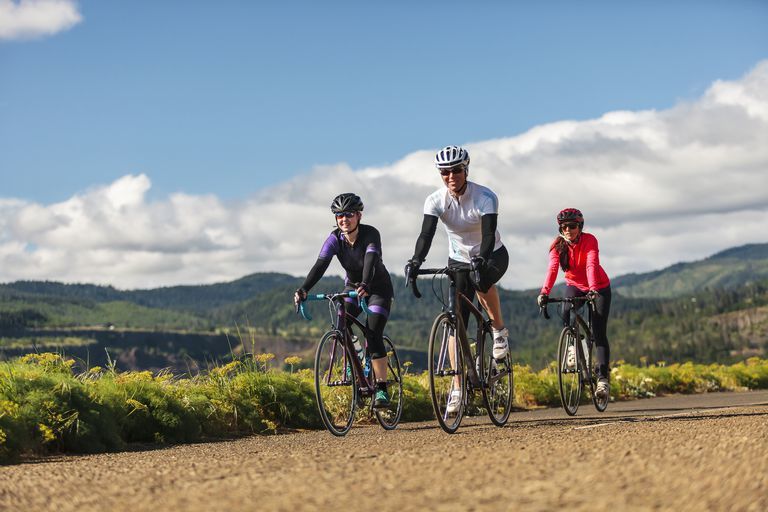 Whether you ride outdoors or indoors (on a stationary bike or trainer), cycling is a great way to boost your cardio fitness and strengthen your quads, hamstrings, and glutes—all of which are used in running—without putting a lot of pressure on your joints, says Dicharry, who’s an avid cyclist himself.

One downfall of cycling, though, is that it doesn’t strengthen your entire body as well as other cross-training exercises. “I’ve coached cyclists who are very cardiovascularly fit, but are are weak in their cores and upper bodies since they haven’t developed those muscles very much,” Dicharry says. He recommends supplementing your spinning with strength-training exercises that target your core.

A major pro of cycling is that it offers a community experience similar to running. If you regularly attend a spin class at your gym, for example, chances are you’ll bond with your instructor (even if he or she demands a punishing set of intervals at the end of class), as well as your fellow classmates, and the company can make the extra training session go by much faster than if you were alone.

“Spin class is a great way to work out with a group,” Ward says. “Oftentimes, cross-training is done alone, which can be tough mentally when you’re used to running with a group or team. So having a spin class or a group ride to go to is good motivation to get the workout done.” 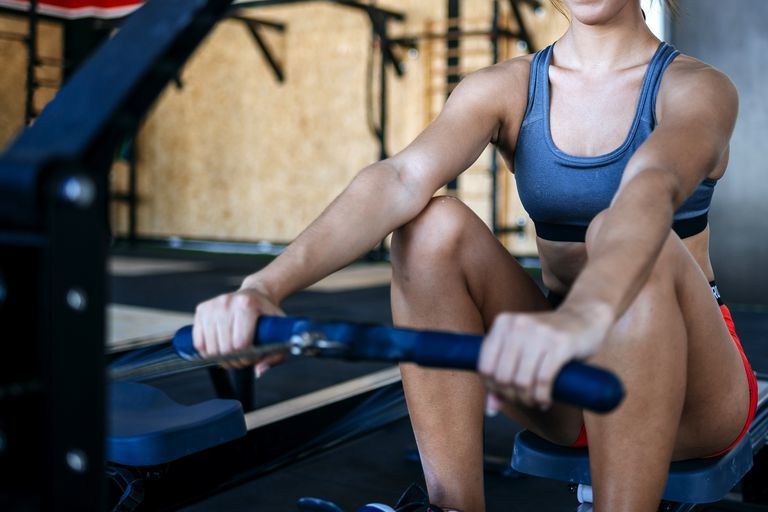 This seated, pushing-and-pulling exercise works up a serious sweat, and it also strengthens areas of the body that are often weak in runners, such as glutes, hamstrings, and both upper and lower back muscles, Dicharry explains.

“Runners tend to be all-quad, and don’t normally tap into their back muscles,” he says. “Incorporating rowing into your routine can build the backs of your legs, which can help prevent injuries in the future.”

He notes that it’s important to maintain proper form on an indoor rower, however, so you don’t tweak something during your cross-training. To start, sit with your feet in the stirrups and your knees bent about 90-degrees. Reach forward to grab the handle, then drive your legs back until they’re almost straight (but not locked), keeping your back and abs tight as you lean your torso back. At this point, pull the handle to your ribcage by bending at the elbows. Finally, straighten your arms while you slide back into the starting position.

Like indoor cycling, rowing has recently exploded in the group exercise circuit, with gyms such as Equinox and rowing-specific studios like CityRow offering high-intensity interval classes on rowers. NordicTrack also recently launched an at-home interactive row machine, RW 900, which allows you to follow along with studio workouts crafted by top trainers or choose from real-life rowing workouts on location with athletes like Olympic rower Susan Francia. If solo training isn’t your thing—or if you’re nervous about using the machine for the first time by yourself—you might want to give one of these options a try.

Low-impact cardio workouts can be a great alternative or supplement to running as they allow you to build a strong aerobic base without punishing your legs and joints with more pounding. For injured athletes who can’t run, doing activities that don’t strain your bones and joints is key for maintaining fitness while you’re sidelined. Just remember to supplement the cardio workouts with rehab exercises and strength training to prevent the injury from coming back.

Should You Quit Your Workout Early?

Should I Have a Beer After My Workout?