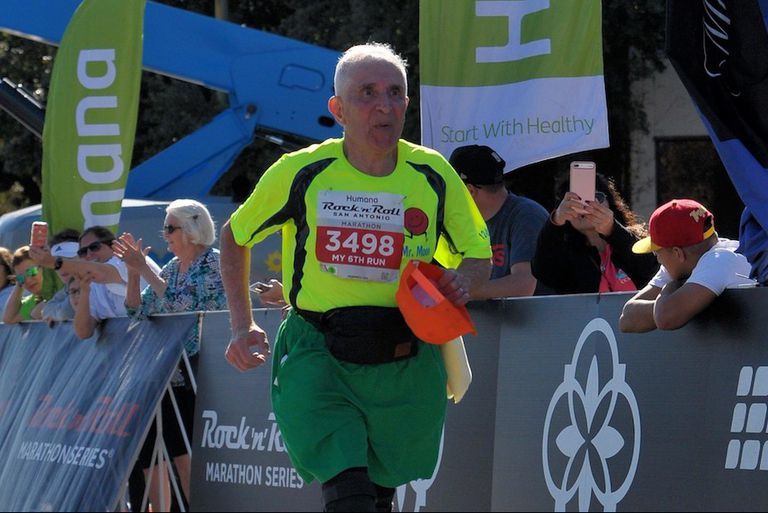 Moon Fahel didn’t start running until he was 80. Now, he’s hooked for life.

Moon Fahel from San Antonio, Texas, had just gotten home from a martial arts class that he’s been taking for the last 15 years when he answered the phone call from Runner’s World. It wasn’t an anomaly—he stays busy with other classes during rest of the week, too: kickboxing, Zumba, athletic dancing, and BODYPUMP, among others.

Plus, he just ran his fifth marathon this past Sunday at the San Antonio Rock ’n’ Roll Marathon.

“I don’t know what old is,” Fahel said. “If I have to describe it, I’ll say, ‘I’ll get up in the morning, I shuffle my feet to go to the kitchen, I stuff myself with breakfast, I get back to a rocking chair and watch TV, repeat that for lunch, repeat that for dinner. And then when I’m aching, I see my doctor and I’ll pop pills in my mouth.’ I don’t want to live like that.”

And Fahel hasn’t come close to that. He worked as a mechanical engineer for a construction company in San Antonio for 35 years, before retiring in 2002. He stayed very hands-on and active on the job, so going from a jam-packed day to retirement was a jarring transition. Fahel’s wife of 66 years suggested they both try the gym, and there’s been no going back for him ever since.

Considering himself a lifelong learner, Fahel’s curiosity overtook him at the gym. He would peer through the class windows and watch people dance, sweat, and just have fun. If he was interested in something, he would simply ask if he could join. If the answer was yes, then he was in—all in—even for dance classes like Zumba.

One day at the gym, Fahel overheard two of his friends talking about a marathon they had just run in Austin, Texas, and how fun it was. Naturally, Fahel wanted in on the action—he asked if they would help him train for one, too.

At the time, Fahel was going through radiation to treat prostate cancer, but he wasn’t going to let that hold him back. He finished his treatment in May 2013, and started running soon after. He completed his first half marathon in November, 2013.

But that first cancer diagnosis wouldn’t be his last—he would fight through two more battles with cancer: thyroid cancer in 2015, and liposarcoma cancer in his right quadricep in 2016.

Like during his first diagnosis, he didn’t let these battles slow him down. Only months after finishing each treatment, Fahel trained and completed a marathon.

Even during radiation treatments, which usually lead to unpleasant side effects, Fahel had the same way of coping every time: running.

“DON’T BE AFRAID OR BE BASHFUL OR EMBARRASSED TO DO SOME THINGS THAT YOUNG PEOPLE DO.”

Fahel’s doctors have always supported his running, even during treatment. Fahel is a man of consistency: He takes his medicine during remission regularly, and he runs no less than five miles and no more than 15 per week, no matter if he’s training or not.

He’s had no major injuries, so Fahel plans to be out on the course as long as his body will allow him, learning and dancing all along the way.

“I’d say to anybody who is aging is be active, eat well, don’t deny yourself anything, and don’t be afraid or be bashful or embarrassed to do some things that young people do.”