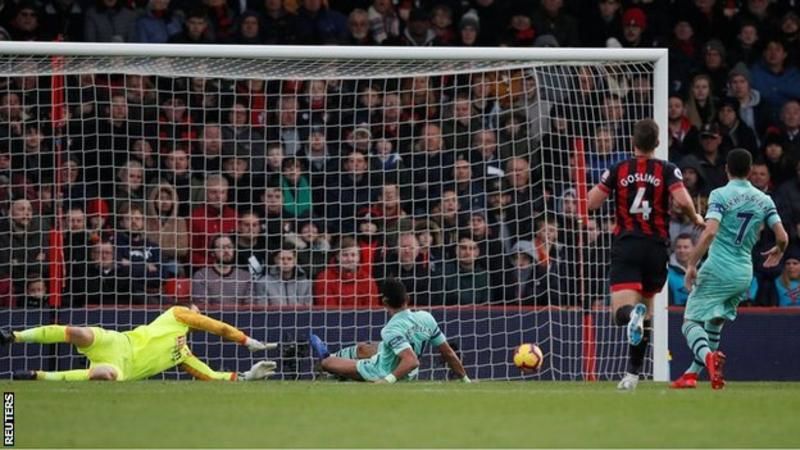 Arsenal manager Unai Emery said he still expects more from his team despite extending their unbeaten run in all competitions to 17 games with victory at Bournemouth.

After embarking on a 10-game winning run earlier in the season, Arsenal had drawn four of their past five games going into Sunday's match at the Vitality Stadium.

But Jefferson Lerma's own goal and Pierre-Emerick Aubameyang's eighth strike of the season secured their fourth Premier League away win of the campaign - equalling their tally for the whole of last season - and moved them to within one point of the top four.

"We've not lost for 17 matches but we've drawn some and that is not enough for us," said Emery. "We spoke in the week about how important today was.

"We are happy and before the match we knew it would be a difficult match and that we needed to win today to be near the top four. Bournemouth were four points behind us and could have been near our position with a win."

After beginning the weekend in sixth, Bournemouth drop two places to eighth and have now lost their past three league matches.

Cherries boss Eddie Howe felt key moments went against his side, particularly when David Brooks saw his early strike disallowed for offside and Lerma hit the post late on.

"We're disappointed with the result - we felt we were very much in that game, but we were on the wrong end of some decisions," said Howe. "I've not seen it, but I'm told the David Brooks [disallowed] goal was onside and the luck was just missing for us - such as Jefferson Lerma's shot hitting the post.

"My players gave everything. We started the game brightly and Arsenal came back into it, but you won't see something like their first goal again. Jefferson stuck his leg out and it went in - that was the sort of luck which went against us."

Bournemouth have enjoyed a brilliant season so far but this loss made it three straight defeats - more than they had suffered in the opening 10 games of the campaign.

They were second best for much of this match, but manager Eddie Howe can point to two key moments of misfortune.

Brooks' disallowed goal will leave the Cherries rueing the lack of video assistant referee (VAR), which is being introduced in the Premier League from next term, while there was also little a manager could do to legislate for a spectacular own goal - Lerma's thunderous finish as he stretched to cut out Kolasinac's pass giving Begovic no chance.

Despite those key incidents going against them, Howe's side demonstrated considerable spirit to level before half-time thanks to a fine finish from Joshua King, fit again after four games out with an ankle injury.

And after falling behind once more in the second half they were unlucky not to equalise when Lerma's long-range strike hit the post late on.

Despite the disappointment, the team have made huge strides this season - they had to wait until the end of December last term to reach their current tally of 20 points.

However, with games against Manchester City, Liverpool, Tottenham, Chelsea and Manchester United before the end of the year, Howe faces a real challenge if he is to sustain Bournemouth's top-six challenge into 2019.

Man of the match - Pierre-Emerick Aubameyang

What they said - 'the luck was against us'

Bournemouth manager Eddie Howe: "If you look at the two goals we conceded, an own goal and the winning goal, for all Arsenal's good play the game could have gone any way."

On Arsenal's winning goal: "I don't think the players individually would say they switched off, but as a team we didn't look alert and we paid the price for that. It's really important that the players don't lose confidence and we have to try and respond next week."

Arsenal boss Unai Emery: "In 90 minutes we deserved to win. We worked with the system sometimes, it's another possibility and we spoke in the dressing room about how we can be better and control matches. But we have won with another system and we can also do that.

"Bournemouth pushed a lot but I'm very happy with every player and how they worked and it's good for next week. We are going to play another match against a top team like Tottenham."

Arsenal march on - the stats

Arsenal travel to Ukrainian side Vorskla Poltava in the Europa League on Thursday (17:55 GMT kick-off) before hosting Tottenham in the north London derby in the Premier League next Sunday (14:05).

Next up for Bournemouth is a trip to Etihad Stadium to play champions Manchester City next Saturday (15:00).