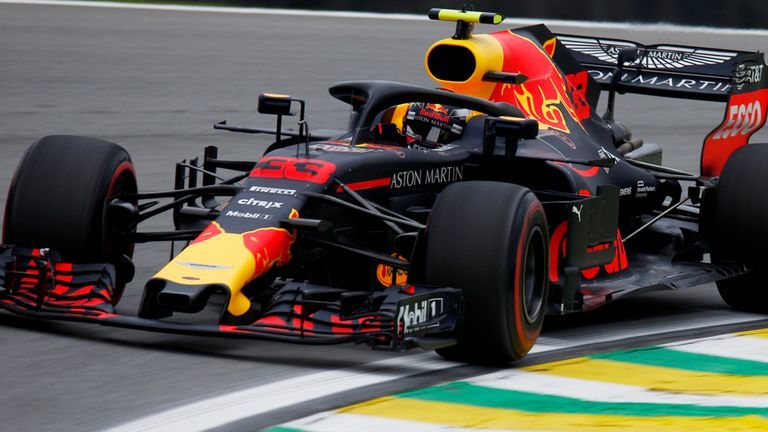 Max Verstappen edged out Sebastian Vettel and Lewis Hamilton in Practice One as F1's big three teams provided a mouth-watering glimpse of what could be ahead at this weekend's Brazilian GP.

Adding to early anticipation that the Interlagos weekend may again prove one of best races of the season despite the Drivers' Championship already being settled, less than a tenth of a second split Red Bull, Ferrari and Mercedes.

Mexico victor Verstappen was 0.049s ahead of Ferrari's Vettel, with new five-time champion Hamilton also within striking distance of the leading Red Bull.

"I wouldn't be disappointed with that grid on Sunday, that's for sure!" said Sky Sports F1's Paul di Resta.

With Mercedes bidding to close out the Constructors' Championship, Hamilton has made clear his determination to win Sunday's race - something he never achieved in the two previous seasons when he wrapped up the title with races to spare.

Mercedes are also keen to rebound from disappointing races in Austin and Mexico, which were won by Ferrari and Red Bull respectively.

"l believe we have solved the issues - it is down to us to sort it out," Mercedes boss Toto Wolff told Sky F1 after the session.

With the top three clear of the rest in P1, Daniel Ricciardo was fourth fastest in the other Red Bull and it was confirmed during the session that the Australian will take a five-place grid penalty this weekend for exceeding engine limits.

Kimi Raikkonen, on the slower soft tyres, was fifth ahead of countryman Valtteri Bottas, who lost track time during the mid-part of the session as Mercedes investigated a possible oil leak on his car.

After a wretched Mexican weekend, Haas started strongly in the midfield battle with Romain Grosjean and Kevin Magnussen rounding out the top eight ahead of Sauber's Charles Leclerc and Force India's Esteban Ocon.

Renault, the lead midfield runners in recent races, were shuffled outside the top 10, although there was little to choose between the 'best of the rest' on the early Brazil timesheet.

Meanwhile, British youngster Lando Norris continued the build-up to his full F1 debut with McLaren next year as he took over Fernando Alonso's car for another P1 outing.

The 18-year-old outpaced Stoffel Vandoorne for the fourth time in as many practice sessions this year, albeit on faster tyres, to finish in 16th place.