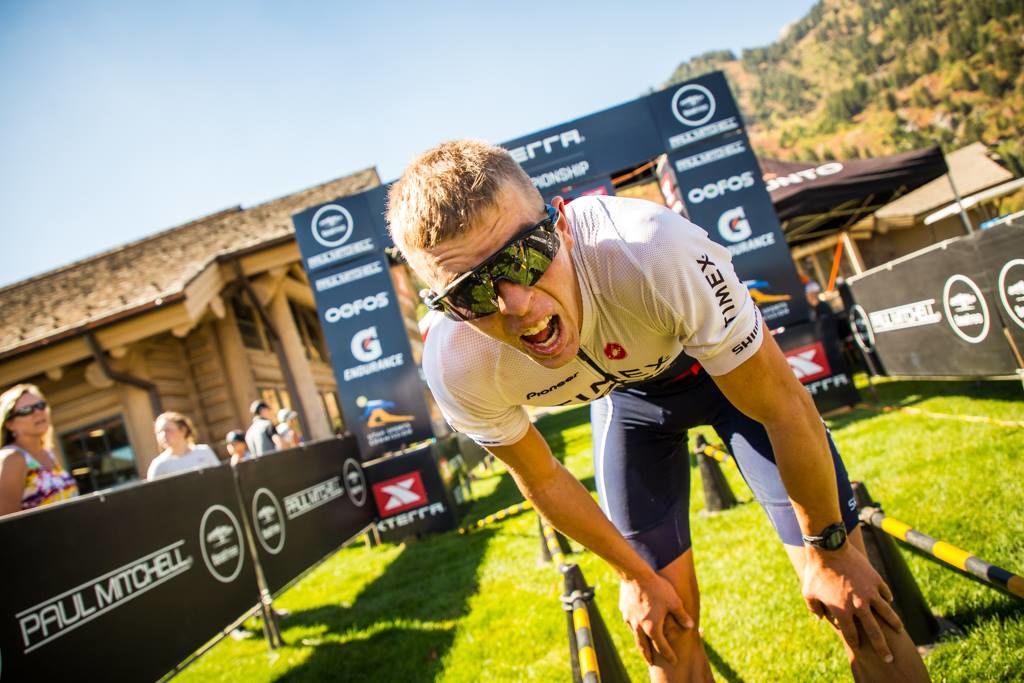 Hitting the finish chute first ahead of seasoned pros such as Matt Hanson and Matt Russell confirmed what many close to Sam Long have known for a while: This 23-year-old has talent, smarts, and speed, and is going to rise up the Ironman ranks fast. A strong biker who has clearly worked hard on his running over the winter, Long snuck into T2 with a 15-second lead, and then never let up to ensure he took home his first professional title in the time of 3:48.50. Jackson Laundry was second in 3:50.43, with Hanson rounding out the podium in 3:52.23. Triathlete.com caught up with Long as he made his way home to Boulder, Colo., a few hours after the race.

Triathlete.com: How were you feeling going into this race? What were your goals and aspirations?
S: I was feeling very good, especially the day before the race. My legs just felt ready to roll. All my workouts since 70.3 St George had gone exceptionally well. I believed the win was possible, but by no means expected it. I try not to focus on a placing/result and instead focus on giving my maximum effort whether I’m in 1st or 100th.

T: Best part of the race for you?
S: Those finish lines feels!

T: Worst part?
S: If I’m honest—and I don’t mean to be a downer—but I saw a few other pros blatantly and intentionally drafting at a distance far less than the legal limit. This really pissed me off.

T: How were the conditions? Anything you struggled with?
S: It was hot. I had to maintain composure on the run in the heat. It was especially tough because the gap to Jackson Laundry was so close that I knew even a few down moments might cost me the lead.

T: At what point did you realize you were going to win?
S: At mile 12.5. For some reason, I still couldn’t quite believe it was happening to me, though!

T: Which part of the race did you execute best?
S: Both the bike and the run were extremely tactical with groups forming and I was paying attention to other athletes’ strengths and weaknesses. Overall, the run wins this title. With such close margins, execution was huge. While I slowed down in the second part of the run it was critical to start fast. That gave me the perception, and to the guys behind me, that I was going to stay ahead.

T: Post-race food? Any beer/cookies/favorite foods?! Tell us all your secrets!
S: We were in the south, so it had to be fried chicken. I ate five pieces after the race. Then some beer. Actually, maybe a few beers, then champagne and ice cream. I totally let go of my diet for the rest of the day after a race.

T: First words your coach Ryan Bolton said to you?
S: Let’s just say it involved a few explicit words said very rapidly and with a lot of excitement. Then we discussed the execution of the race and how I won, ultimately, on the run, which no one expected.

T: Any blisters, any chafing?
S: I went no socks on the run, so yes, some blisters on the feet. (If you’re not squeamish, check out my Instagram story @samgolong for some blister squeezing action!)

T: First thoughts when you hit the finish chute?
S: THIS IS AWESOME!

T: Pre-race brekkie?
S: Two eggs cooked sunny side up with white rice (600 calories), a banana, and a black coffee.

T: What (and when) will your first workout be post-race?
S: Monday will be a 90-minute spin and an optional run if I feel like it. Don’t ask me what the rest of the week looks like (but if you can’t resist then you can find me on Strava)!

T: What does the rest of your training week look like?
S: Oh, OK, you asked….It’ll be about 25K swimming, 20 hours on the bike, and 100K running. The focus is on hitting two long runs and two long rides this week with solid swims virtually every day. The intensity of my training will be more in the Ironman range this week.

T: What’s next on your racing calendar?
S: Ironman 70.3 Victoria in two weeks.

T: What does the rest of your racing schedule look like this year?
S: It will be heavy on the racing, that’s for sure. I plan on doing Ironman Lake Placid, Ironman Chattanooga, and Kona. I will mix in some more 70.3s as well, and it looks like I also just qualified for 70.3 Worlds in Nice.

T: Tell us who all of your sponsors are…
S: My main sponsor is Suunto. I am on their Multisport team which then has a host of affiliate sponsors including Enve, Cervelo, Castelli, Blueseventy, and others. My personal sponsors are First Endurance, Zealios, Ice Friction and Rudy Project.

T: Best post-race recovery tip?
S: Don’t take advice from me! I never do it right. Seriously, though, I would say consider what the benefit is to the mind versus the body. It might be best to finish the race and go straight to your hotel room and have a recovery shake and sleep for the rest of the day. However, we all put in a massive amount of work to cross the finish line, so maybe, just maybe, it’s worth it to let loose a little bit and have your favorite treats. The body follows the well-being of the mind. Then get back on the recovery the next day.